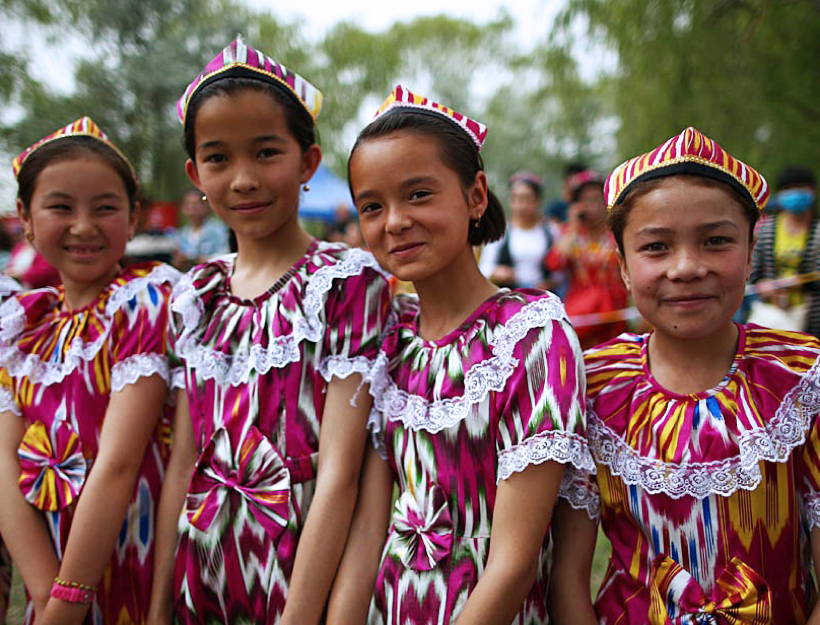 It is a difficult thing to do, to look long enough at injustice to see it, to comprehend it, and then to contemplate the question, “Do I have any responsibility toward it?” Even watching a beautiful film based on historical events about individual choices like A Hidden Life can be a challenge when one already knows, or at least suspects, the cost of the choices of the main characters. Whether the injustice is in our own backyard as in the systematic racism of some of our core institutions in the U.S., especially in regard to policing, or if it is across the sea in a country we know little about, what, in our modern times, is our response? What is our responsibility?

And what if what we need to look at isn’t in a historically-based film or a book written by a young Jewish girl in hiding during the Holocaust? What if what we need to look at is happening today, in our own time? Could the young Uighur girls pictured above be the Anne Franks of our time? And what if there are actions that we can engage in to help stop the injustice? Actions that may be uncomfortable to us in our privilege, actions that may cause us inconvenience, actions that we may have to explain to friends and family?

The website Silk Road Peace Project sums the situation up:

“Reliable sources indicate that up to 1.8 million Uyghurs and other ethnic minorities (Kazakh, Kyrghiz, and Hui) are being held in “re-education camps” in the Xinjiang Uyghur Autonomous Region (XUAR). The entire province is under a high-tech form of martial law with a dense network of facial recognition cameras and police check-points. This combination of concentration camps plus high tech surveillance has created an Orwellian nightmare unprecedented in human history.

Eye-witness accounts indicate that brain-washing techniques, psychiatric drugs, torture, sexual abuse, malnutrition, and unsanitary conditions are rampant in the camps. A severe religious persecution is also underway, targeting both the large Muslim population as well as Christians and other smaller groups. In addition, extreme cultural repression is taking place province-wide including a ban on minority languages, ethnic dress, customs, and even decor. The most informed and reliable news sources are using the term “cultural genocide” to describe what is taking place.”

What is the growing evidence of these humanitarian abuses?

Reports of what is happening on the ground with the Uighur people have been bubbling up from humanitarian agencies and non-profit reporting especially from 2017 onward – but now these reports are reaching the mainstream press in America. The New York Times has featured several articles, including the publishing of leaked official government documents that show systematic repression, relocation, and mass internment of the Uighur people.

Here is a report from the PBS Newshour:

So the question now begs itself, “What can I do?”

When we understand that there is injustice being committed, we-must-do-what-we-CAN-do! In the case of those living in the United States, we can lobby our elected officials to finalize the Uyghur Forced Labor Prevention Act. This act has already passed the House as of 9.22.20, but it still needs to pass the senate. Here is a link to find out who your senator is if you don’t know and how to contact them! This is essential!

Also, since this act has passed Congress, unfortunately U.S. companies with financial interests in China have begun to lobby the Senate and put pressure on senators to water down the bill. This includes one of the most prosperous companies on the globe, Apple, Inc. Here is a link with a sample letter from Silk Road Peace Project to the head of Apple, Tim Cook, and his email address.

Also, there are several key non-profits that are committed to doing the daily work of educating and putting pressure on those in power to bring an end to these massive human rights violations. Here are a few that we are acquainted with that can use your support:

And finally, there are multiple boycotts and letter-writing campaigns that are underway. Are we willing to put the power of the purse behind a cause that will impact those imprisoned and impoverished so far away?  Or take a few minutes to write a company or elected official on behalf of the persecuted Uighur people?

The latest reports are showing that the Uighur people in the Xinjiang region of China have been used in forced labor to produce products not only for Apple but also for the brands Nike, Coca-Cola and Costco.  An example of how the product supply chain becomes “tainted” is cited by the Austrian Strategic Policy Institute, “the factory employed around 800 Uighur workers at the end of 2019 and produced more than seven million pairs of shoes for Nike each year.”

But by far the largest impact will be a boycott of apparel that is made from cotton imported from China. According to a breaking story on BBC News, new documents give a clear picture of the scale to which Uighur forced labor is being used for, “…picking a crop that accounts for a fifth of the world’s cotton supply…. used widely throughout the global fashion industry”.

What does that mean for us in the United States other than demanding this law be passed in the Senate?  It means taking the time to research (checking the label!) of any apparel we purchase or anything made with cotton. Companies like Gap, Patagonia and many others have all been under fire for using cotton in their apparel from the Xinjiang region. To keep up with the amount of products to avoid and letters to write, check back with the “End Uyghur Forced Labour” site often, especially before purchasing Christmas gifts! It’s a small inconvenience for us but if we all do our part, we may be able to stop this injustice. And we can at least answer the question, “What am I to do to help fight injustice today?”