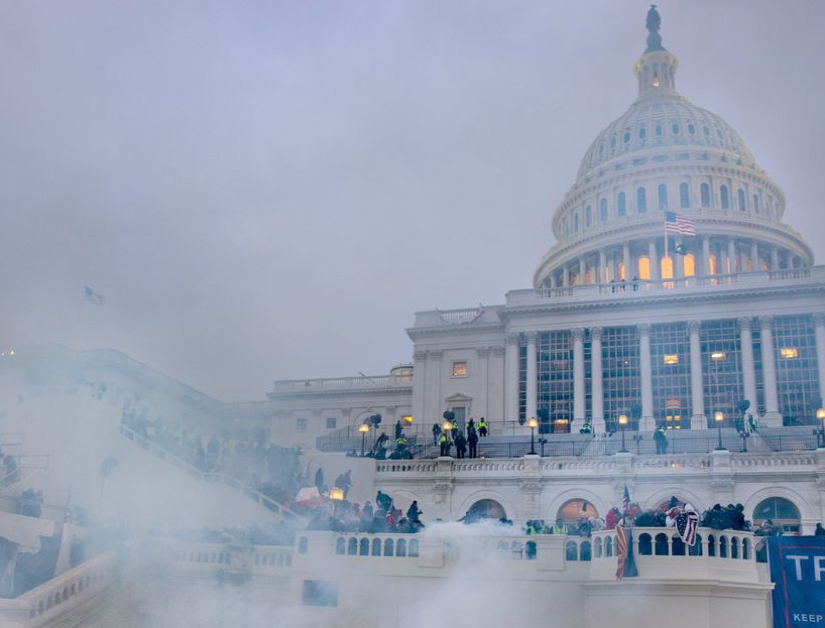 Smoke on U.S. Capitol, 1.6.21 – Photo for The Washington Post by Evelyn Hockstein

“What do you love about America?”…

In the midst of the most devastating pandemic to reach the United States in my lifetime where currently according to the Los Angeles Times, “A person is dying every 10 minutes. And Los Angeles Mayor Eric Garcetti noted Sunday that a person was getting infected every six seconds”, Americans are undergoing a cultural and political struggle to complete the “peaceful transfer of power” so central to the heart of our democratic process.

The anxiety and unsettledness I feel in looking up the definitions listed at the bottom of this piece is so tangible and strong.

Reading the definitions calls my emotions back to actually watching the events of that day unfold live or watching videos of what occurred – or reading about them now as more details emerge, and again my heart starts to beat more pronouncedly.

As an adult I come from 25+ years of conservative outlook, largely based in the teachings of Evangelical Christianity…

…but as my life’s journey has unfolded into my mid-50’s, I have progressed further and further away from the “right / wrong”, “good / bad”, “heaven / hell” concepts that the American author, spiritual writer and Franciscan friar Richard Rohr calls a part of dualistic thinking. His teaching combined with that of many others, particularly learning from those coming from a Celtic Christian perspective such as J. Philip Newell and poets David Whyte and the late John O’Donohue have led me to a much more open path in my Christian faith. Something else that has contributed to my journey was the time I spent sojourning in Florence, Italy, the birthplace of the renaissance, with a study abroad program hosted by my local community college.

There, as we studied the history of the Italy, I felt the history of the Christian church was laid bare. Gone went the simplistic idea that Christians have always been in the “right”, the white hat / white horse savior ideal. While it’s true that throughout history people of faith have been honorable, admirable, loving, even sacrificial humans, this study continued to show me that the more proximity to power the people of my faith have experienced, the temptation and potential for horrible and unjust behavior has also increased. Certainly horrible and unjust behavior that resembles nothing like the founder of our faith, Jesus of Nazareth, ever exhibited or taught.

As my education continued…

…with taking wonderful classes on subjects like sociology, literature and art history, I became more and more aware that not only was my faith not built on a pristine history of interpretation and actions, but that neither was the history of my country, two things that were often taught outright or implied in my evangelical background.  The “sins” (to use religious language) of the church and the “sins” of the country are multiple and grievous. Does this opening understanding invalidate my personal faith? No. Do these horrible, immoral crimes such as slavery, systemic racism and oppression negate my love of country? No. Learning about these things has simply brought a deeper understanding, a wider thinking, that actually causes me to press in further toward continuing clarity, honesty, and work. This understanding leads me to be an active part of moving toward the ideals of both.

In my past thinking from a conservative perspective and in my current more progressive understanding, I have always felt very patriotic about my country of origin, America.

Once when talking politics with a Canadian friend years ago, he said, “You’re so patriotic you ought to get an American flag tattooed on your a**!” So funny! But I mention my personal journey here to give context to the pain I feel in seeing my beloved America come so close to going up in flames last week on January 6th. And although I now consider myself a “recovering evangelical”, I know many people that have stayed within the American Evangelicalism system of beliefs and that have embraced the political power offered them through the current U.S. President as an means to their desired end(s).

In fact, according to an extensive article from 2015 in The Atlantic, Evangelical Christianity is, “… to the politician… a synonym for a white Christian Republican.” As we know, in the presidential election of 2016 “fully eight-in-ten self-identified white, born-again/evangelical Christians say they voted for Trump” according to Pew Research. To that point, as the events of last Wednesday unfolded, those activists and people of color that I follow on social media began to draw contrasts between the police / authority response during the Black Lives Matter protests of this past summer and what was witnessed this past Wednesday.  Here is a photo of preparedness and response to the Black Lives Matter protests from last summer in Washington DC: 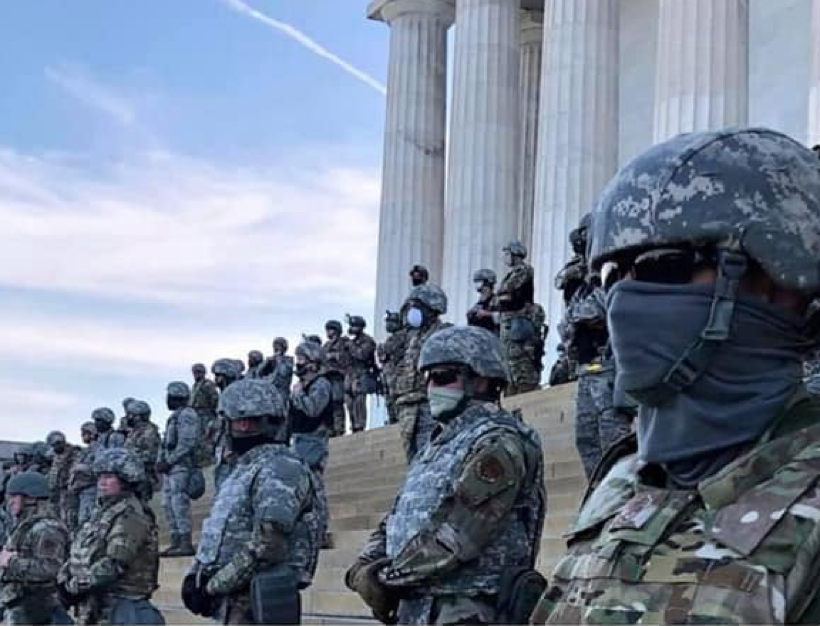 Below is a photo of U.S. Capitol Police Officer Eugene Goodman attempting to hold back an angry mob by himself as they broke into the US Capitol building. He is now considered a hero as the story unfolds – that he knew the senators were not finished evacuating to safety and that he led the rioters on a chase in the opposite direction to give the elected officials more time to exit the chamber. 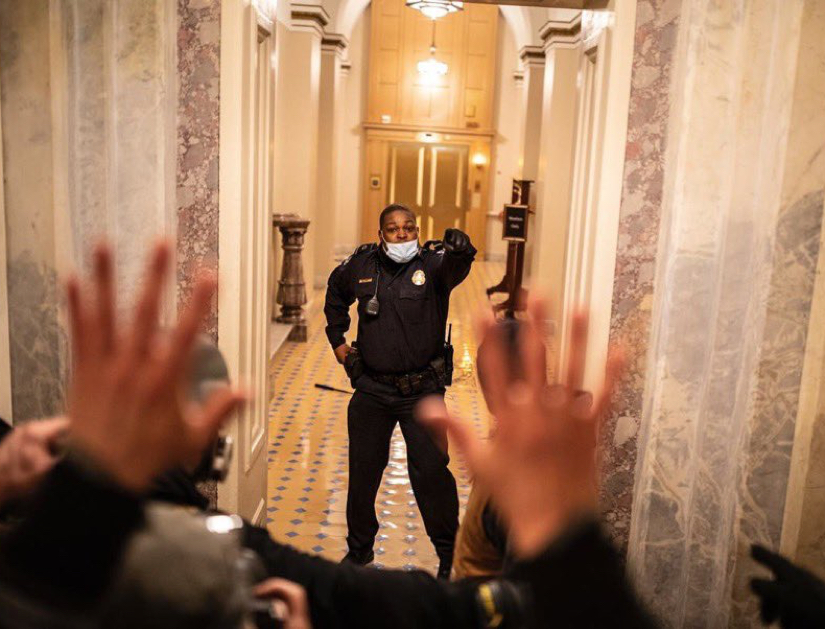 Those that I follow were remembering and reminding people of a basic truth, that the response of police and those in authority is VASTLY different when it comes to interacting with black and brown people than with white people. This is also something I’ve written about in an article about police response in the city of Pasadena, California.

As you may know, we at Culture Honey have participated in multiple peaceful protests in the aftermath of the killing of George Floyd at the hands of Minneapolis police. I have also personally participated in four years of the Women’s March beginning on inauguration day in 2017 and have written about those experiences on CultureHoney.com. I’ve also written about the difference between protests and rallies and the great American tradition of both of them!

Having said all this, nothing in my background could actually prepare me for the shock, but unfortunately not the surprise, of what happened in our nation’s capitol this last week. 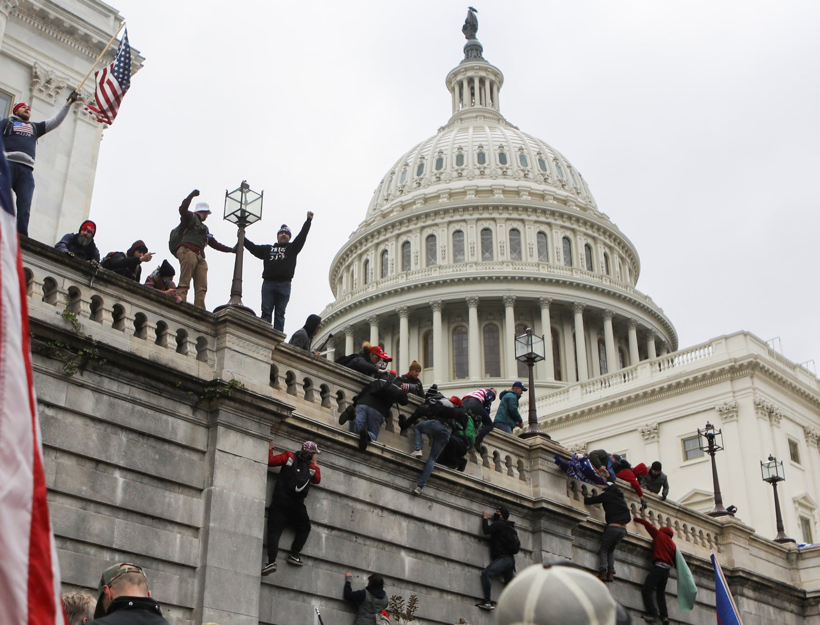 The people that scaled the walls outside the building reminded me of the terrifying orcs from The Lord of the Rings, intent on blind outrage and obedience to their leader with violent intent. The fact that banners were being waved and posted on the walls with the current president’s name and that some rioters carried signs and flags with “Jesus” and “Christian” slogans on them was especially disturbing since Jesus himself did not exemplify or preach violence as a means to an end. Five people have died as a result as the events of this terrible day. Others will be traumatized forever. These rioters brought a noose to their mayhem and confederate flags. They shouted about “hanging” the vice president.

There was nothing that I recognized as Christian – or American for that matter – in the actions or words of those leaders who sought to agitate the crowds gathering in our nations capitol that day or the actions of rioters last Wednesday. Nor is there anything remotely Christ-like in the silence of many of our national leaders or my evangelical friends, silence instead of condemning and calling for prosecuting immoral, violent, and undemocratic acts.  Pope Francis has it right as he tweeted today, “I am praying for the United States of America, shaken by the recent attack on Congress. I pray for those who lost their life. Violence is always self-destructive. I urge everyone to promote a culture of encounter and of care to construct the common good.”

According to Merriam Webster, a riot is “a violent public disorder, specifically, a tumultuous disturbance of the public peace by three or more persons assembled together and acting with a common intent.”

Collins Dictionary says, “A mob is a large, disorganized, and often violent crowd of people.”

“A lynch mob is an angry crowd of people who want to kill someone without a trial, because they believe that person has committed a crime” according to Collins Dictionary.

A protest, according to the Cambridge Dictionary, is “an occasion when people show that they disagree strongly with something by standing together and shouting and carrying signs, especially on the streets.”

“a government in which the supreme power is vested in the people and exercised by them directly or indirectly through a system of representation usually involving periodically held free elections.” – this from Merriam Webster.

A peaceful transition of power

Wikipedia defines the concept as “…important to democratic governments, where the leadership of a government peacefully hands over control of government to a newly elected or selected leadership.”