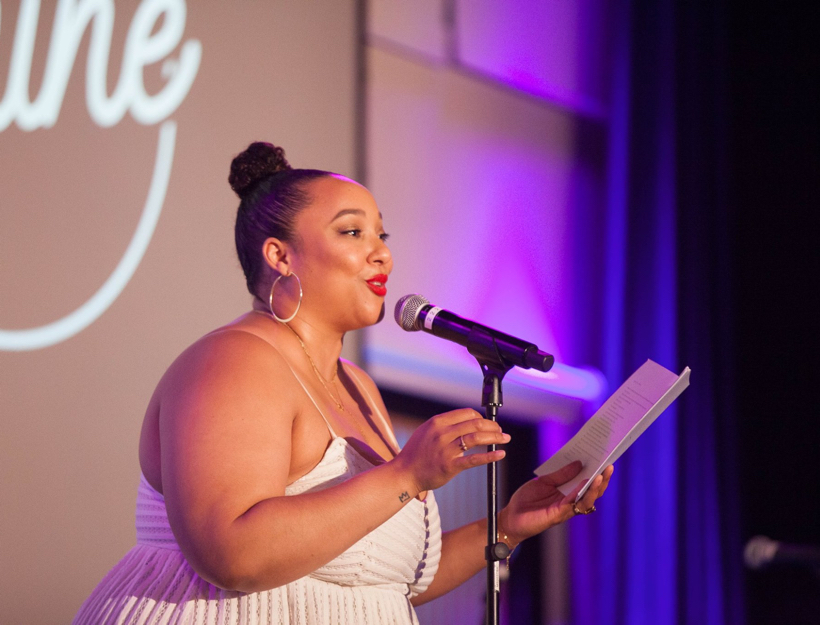 Two Sides of the Same Coin

Natalie Patterson describes herself as a Teaching Artist, and it doesn’t take long in our conversation to find out why. Art for Natalie is about more than just performance: it is about community; it is about creating a place of understanding and discussion.

Like many poets, Natalie took to the stage as a medium for delivering her poems. She began as a performer and a writer of poetry, travelling the spoken word scene and performing at all sorts of venues.

But something felt off. Something was missing. In the age before the internet, a poet was only as good as their next performance. And even with the internet, this hasn’t changed.  The poetry she saw performed wasn’t about changing the world or reflecting on society. It was about making poetry that could sustain you – it was about making money. Slam poetry was so huge that many poets were just there competitively. They didn’t want to make a statement.

Something was definitely off.

“Hi, I’m Natalie Patterson. Can I take over your classroom, please?”

When she was touring as a slam poet, performing at various universities and venues, Natalie decided to visit the local high schools and ask if she could take over a class while she was in the area, if she could perform some of her poems for the class. She was already there performing in the evening, so she might as well do something with her days.

Natalie quickly discovered how incredible this was, and so after touring, she set up a workshop. She found that there was no place to talk about the process of creating poetry. Learning the technical skills of a poem was not her interest. Any poetry book could teach that. Natalie was interested in teaching the practice of listening, of understanding, of translating a thought into a poem.

“Poetry is the most human thing.”

“It becomes a pop culture thing where people are like, ‘Oh, I love this poem’ for ten seconds and then they hang it on their wall or they listen to it in their room or on their way to work. But it isn’t a thing that continues a conversation.”

And that’s what Natalie wanted. She wanted a conversation. She wanted to create a place where people could learn to feel and think and question. Poetry was about teaching something. And the best teachers Natalie remembered were the ones who would always ask, ‘Why does this matter?’

Why Does This Matter?

Among Natalie Patterson’s brilliant repertoire of work is her latest project, Pen Pal.

Pen Pal embodies the idea of creating a place of understanding and working together. It is a short video of a love poem, a love poem to yourself, a love poem to god. As someone who has spent a lot of time as a poet being produced, Natalie has seen many of her poems taken by others and contorted to fit their ideas. So this time – with the help of two of her friends – she decided to produce her own video.

It isn’t often that friends choose to work together on a scale such as this. As Natalie says, usually “we support our friends, but not in ways that best serve them. Like yeah, let’s go to brunch or let’s hang out. But when it comes to creating something or working together or generating something that could make a difference in each others’ lives, that becomes secondary.”

And it’s true. But not this time. This time the three friends got together and brainstormed what they would do. They had no money, but they each had their skills. A poem was chosen and a plan was made.

On the day of shooting they discovered that working together in a genuine collaboration is fun and very efficient. The whole shoot only took a few hours. After an editing process of collaboration, the final product was complete and sent into the world, a giving at a time when so many are taking.

“If you invited god over, who would show up?”
*