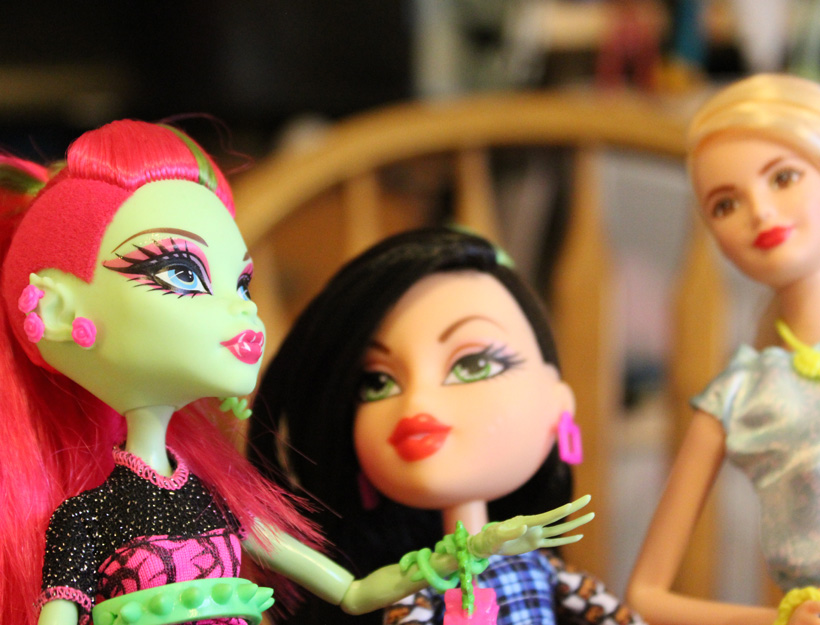 A girl gasps in excitement as she opens her first Christmas present. “Mommy, you were able to find her! Thank you! Thank you! Thank you!” As she runs to hug her mother, her new Barbie doll dangles from her arm. Her long, blonde hair cascades down one side of her head… and the other side is shaved down to peach fuzz. Yes, that’s right, now even Barbie has joined the trend of releasing dolls with shaved heads. Considering that when I was growing up a shaved head usually meant nothing good, what does it mean if dolls with such hairstyles are now being sold by the thousands? 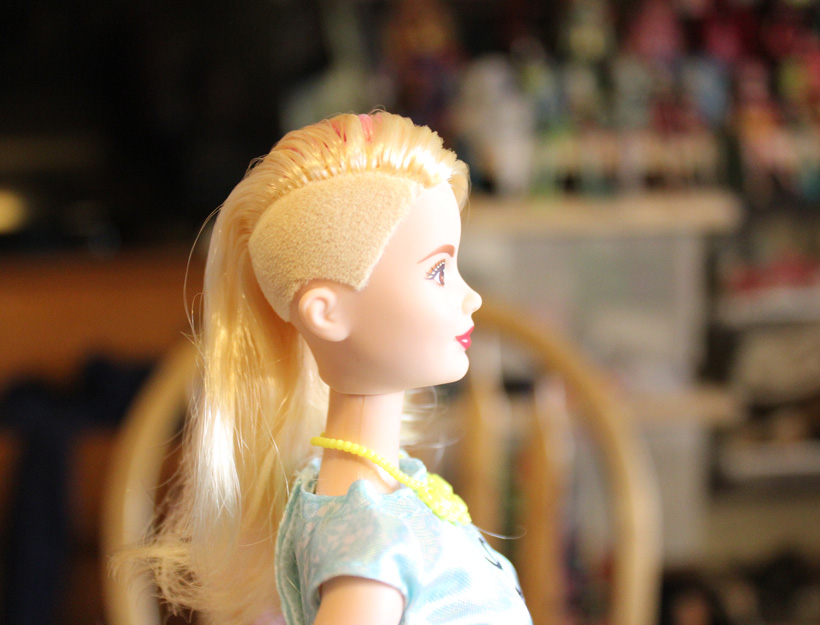 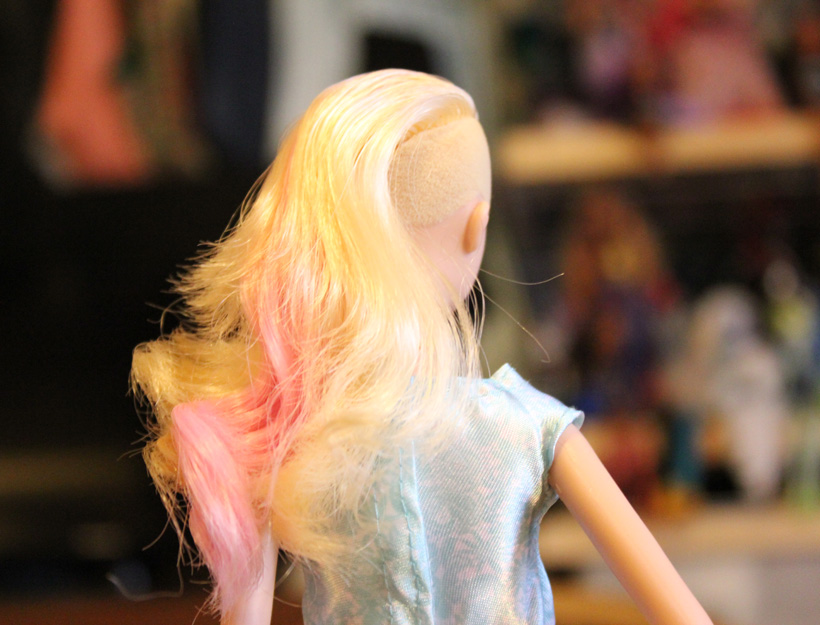 Toy companies such as Bratz, Mattel and Hasbro would not be producing dolls like this if they did not have confidence that they would sell well. Current toy trends seem to indicate that kids, and the growing adult collector community, prefer dolls with a bit of an edge to them. Monster High, a doll brand focused on producing the teenaged children of monsters, launched in 2010. It has quickly skyrocketed in sales to become the second best-selling line of dolls in the world. Meanwhile, while Barbie still holds the top spot, her sales have been declining in recent years, which likely spurred some changes in the type of Barbie dolls that were being made. 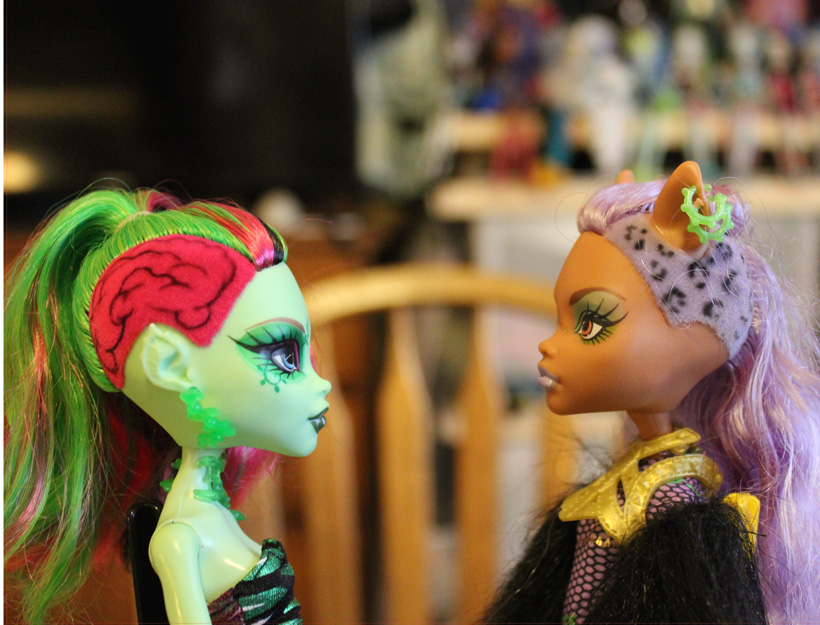 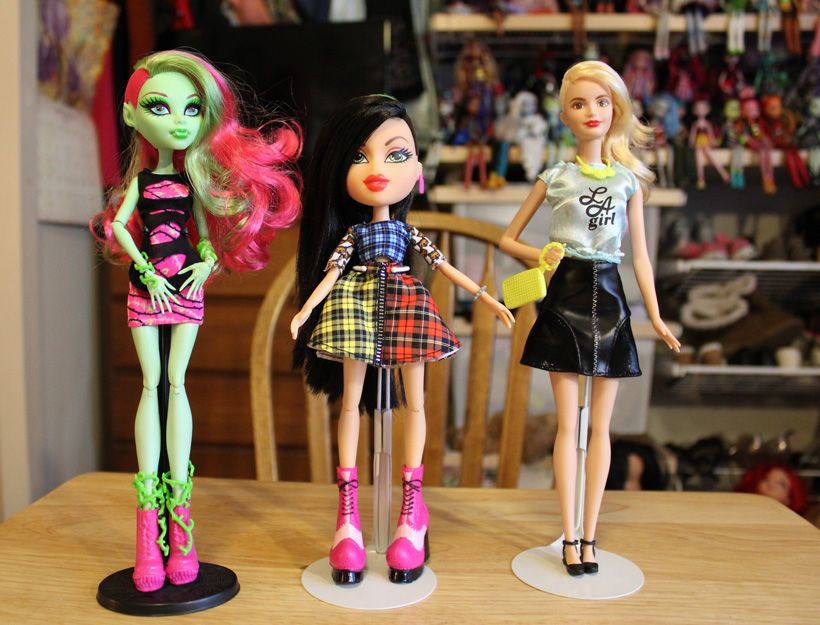 What is ironic to me in all of this is that though the demand is for edgier, more “monstery” dolls, the very fact that something is produced by a hugely popular toy company shows that this shaved head look is coming into popular acceptance, and thus only appears to be edgy. Dolls with mohawks and undercuts openly make reference to the historical origins of these looks, which came from rebellious groups on the fringe of society, such as the punk movement. Venus McFlytrap, introduced as a member of Monster High in 2012, had the phrase “eco-punk” printed on her vest. Rainbow Dash sports a rainbow colored mohawk in the Equestria Girls Rockin’ Hairstyle line, and has a guitar shaped purse with Union Jack stickers on it, reminiscent of the early origins of punk as a subculture in Britain, inspired by groups such as the Who. However, instead of being connected to the drug use and anger that accompanied the punk movement, Venus is shown to be a nature lover, and Rainbow Dash is exemplified as a loyal friend. What truly made people in the punk movement outsiders has been stripped away so that these dolls can be sold to the general public. 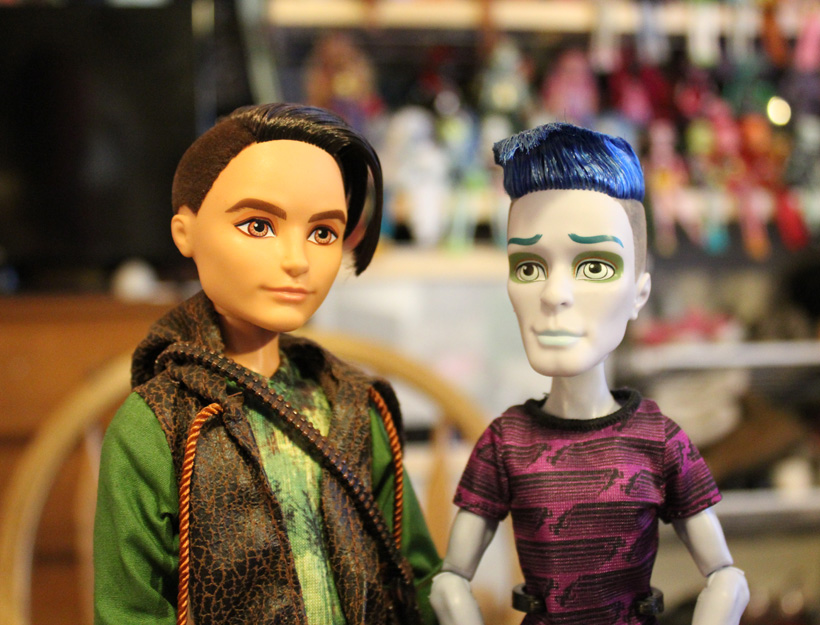 Hunter Huntsman and Slo Mo, Ever After High and Monster High

Is this a deceptive sales tactic? I would actually have to disagree with such an assessment. We humans are always trying to define ourselves by our actions, our belongings, the people we associate with… in short, our culture. However, since man is not only the product of his culture but also a producer, how society perceives the world is constantly changing. Movements like punk can’t stay edgy forever. As more and more people join such a movement, the rebellious, pariah status of the movement naturally fades away, since it is no longer the few but the many who love punk. The socially acceptable parts of punk, such as the propensity for artistic expression, are kept, while the more negative elements are taken away. At this point in time, the wild hairstyles associated historically with rebellion and pariahs are now the domain of the artists and the free spirits. To some extent, these are the same sort of people who may have joined the punk movement in its earlier days. Now though, since these people feel accepted by society, they no longer rebel against it. Their shaved hairstyles fit into a socially acceptable niche of society. 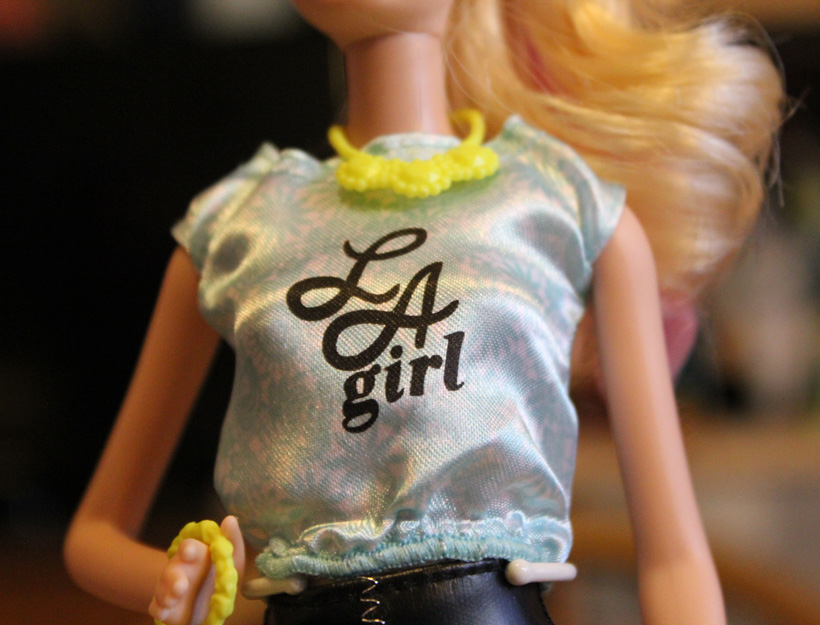 If you find yourself looking at a doll with a shaved head as you wander through your local Walmart or ToysRus, take a moment to reflect on what it means that the Barbie of today can look so different from the Barbie a couple decades back. Perhaps you might say that such hairstyles on dolls reflects the ability of popular culture to take what it wants and leave the rest, forgetting the past in order that the present look sweet and simple. However, you may also see this doll as a sign of the steps forward our society has taken in accepting others. These dolls show children that it’s OK to be different, to be expressive, to even be a bit wild. They can be themselves and still belong. While Monster High and My Little Pony may not show the full scope of the historical movements they allude to, their message of acceptance and friendship to all kinds of people hopefully means that more children will come to realize how truly special they are.
*