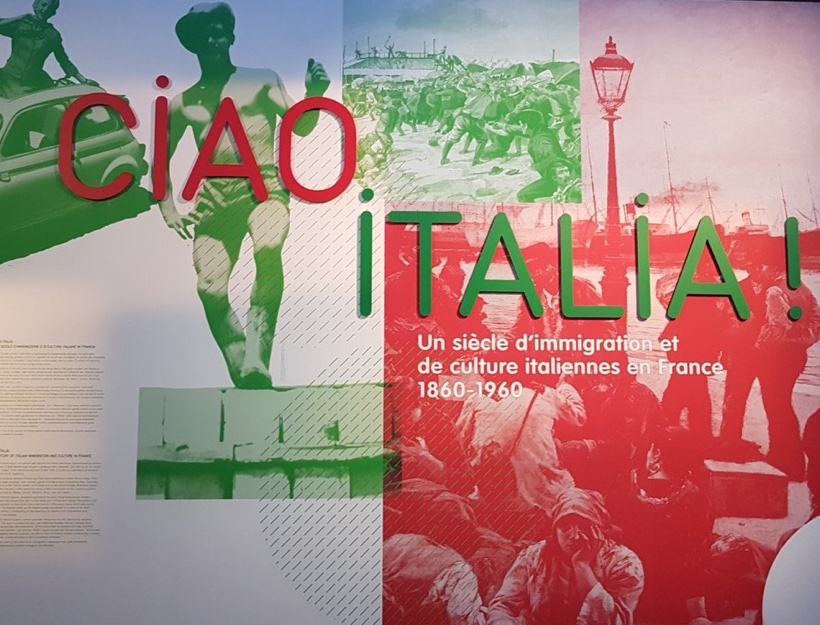 The word “ciao”, originally from the Venetian language, is an informal salutation in Italian that is used for both “hello” and “goodbye”. This seems fitting – are not we continually coming and going?

Ciao Italia!, the National Museum of the History of Immigration, Palais de la Porte Dorée, reports the history of Italian immigration for the first time on a national scale.

It honours the important contributions of the Italian people to French history and presents a truly unique and value-added arrangement of nearly 400 pieces from French and Italian institutions. 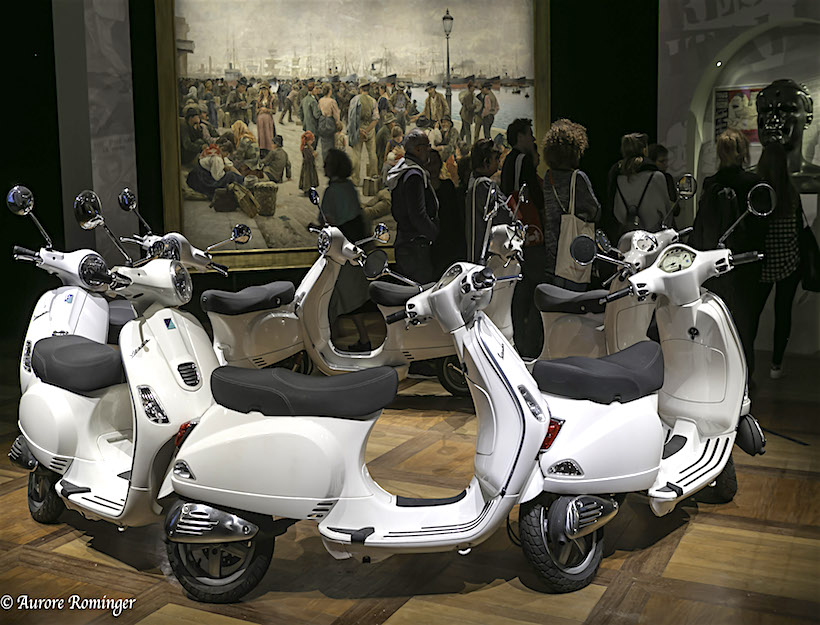 Ciao Italia! subtly expresses an exceptionally original and fruitful dialogue. Among archival documents, this pedagogical itinerary traverses the intellect, and through artistic works invites a stroll through history that viscerally impresses a core understanding. 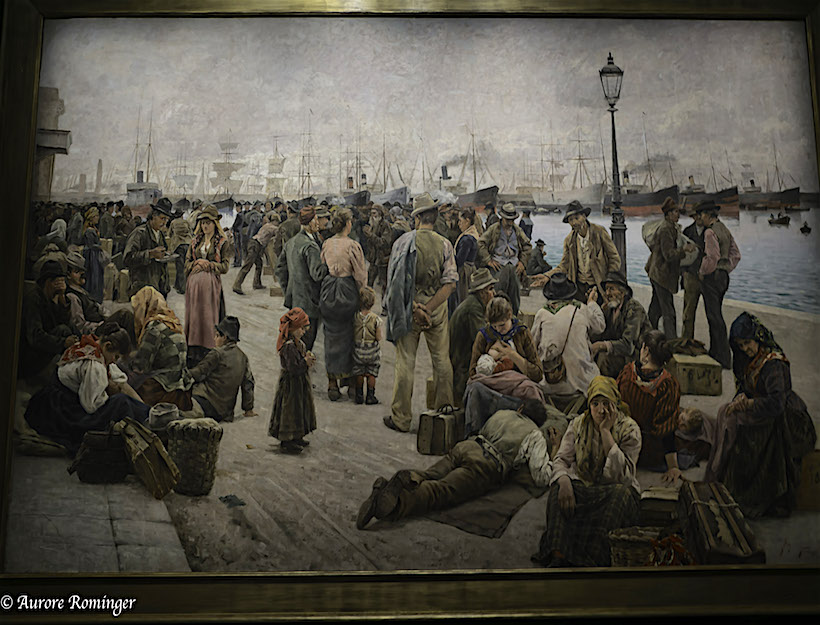 Exposition: The Phoenician city of Marseille, a long-standing arrival destination and settlement location of immigrants,  welcomed 90,000 Italians in 1901.

The exhibition occupies space and arranges time to cross dimensions in perception. It is through sensitively and precisely sequenced stories, historical documents and objects, photos, films, art, and inventions coupled with series of individuals’ possessions scattered throughout that the viewer is offered the opportunity to feel confused.

From the second half of the nineteenth century until the 1960s, Italians were the greatest number of foreigners in France to occupy the jobs created by economic growth. The image of the Italian in France was paradoxical, wavering between disgusting prejudices and benevolent gazes. The conditions of reception were rugged and difficult, and the ultimate integration of Italians was not without clashes. While today celebrated in their integration, it was neither instant nor shameless in its origin. 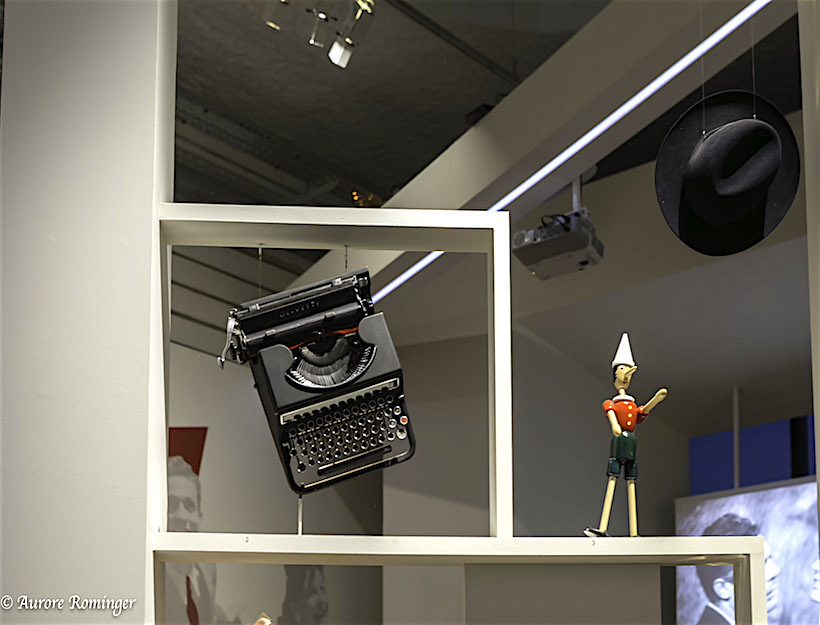 The intimate display of personal objects, photos, postcards and letters invites the viewer to plunge into what it might be like to know nothing of one’s next step. To feel what it is to be self-abandoned, left behind or scattered, harshly stripped from reality.  The bits of fragmented-self remaining are left to grapple with the severity of uncertainty. Perhaps, as an emigrant and naturalized citizen, I am particularly sensitive to this issue. While not seamless or simple, also leaving many belongings and bits of personality behind, my emigration has been, as for most emigrants, motivated by the choice to move forward. However, I never have felt or been (that I am aware of) targeted as unwanted. 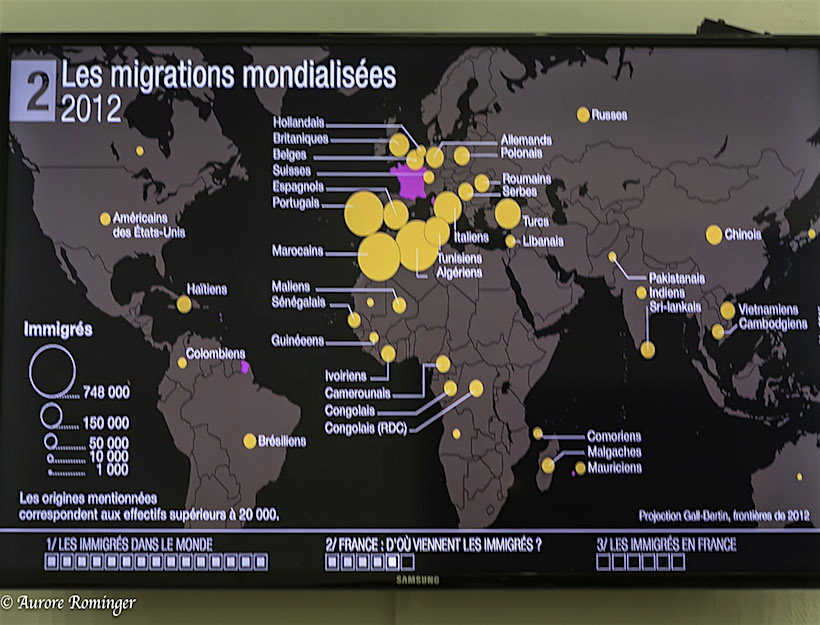 As I expanded my ability to put myself in the well-worn shoes of other emigrants, I could feel what it might be like to be desperate to even dare to think that somewhere a new life existed. Perhaps there is a poignant recognition of slowly losing touch with the minimal selection of cherished belongings that have been carried along, that suddenly become merely remnants and scraps of a previous existence.

Therein even the only accessible familiarities also become foreign. The face of reality forces an inner strength: to engender hope that there will be a new resting place to call home.

The exhibition retraces the geographical, socio-economic and cultural journey of Italian immigrants in France from the Risorgimento (revival or reunification of Italian lands that began in 1815) of the 1860s to the celebrated Dolce Vita by Fellini in 1960. Between mistrust and desire, violence and passions, rejection and integration, Ciao Italia! reflects the specific contradictions of the history of this immigration while simultaneously highlighting the contribution of Italians to French society and culture. It plays the clichés and prejudices of the time and recalls the xenophobia of which they were victims.

Ciao Italia! calls us to awaken a resonance within for both the intensity of personal experience, and appreciation of the impact of the socio-economic and cultural contributions concomitant to integration. Equally, and moreover, the exposition is coupled with delightful and humorous experiences to joyfully acknowledge turning points that lead toward comprehension in the grand breadth and melding involved in social adjustment.

Largely the Purpose of Art

The value-added selection and arrangement of nearly 400 pieces from French and Italian institutions is the art of the Ciao Italia! curator. Art generally is communication that is accessible by sentient beings – it resonates or touches the heart. It reaches beyond ‘institutional-speak’, and advances beyond documentary evidence. Its power to inform invokes clarity, and this aspect adds excellence to this exhibition experience. 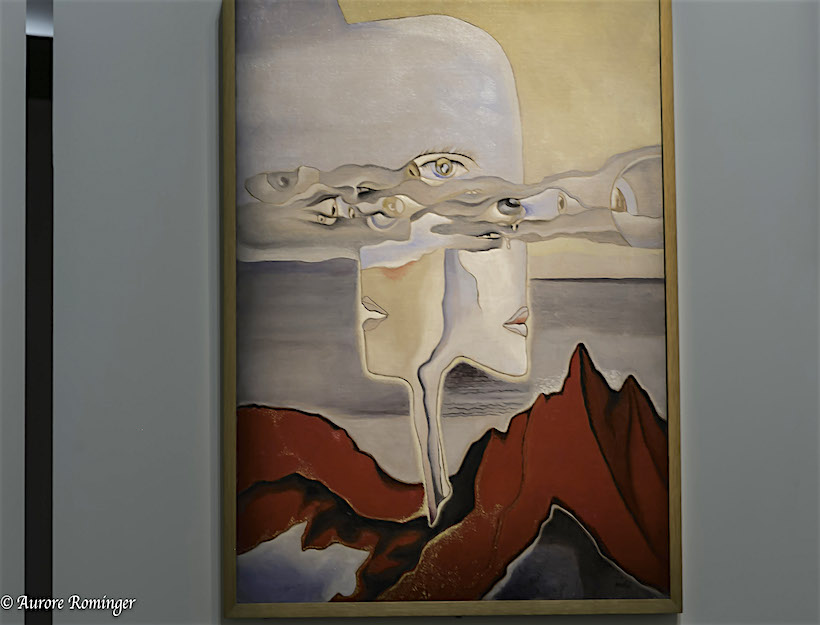 Opium is by Alberto Martini [1876, Ordezo Veneto Italia – 1954, Milano Italia], an Italian painter, engraver, illustrator and graphic designer. He relocated to Paris in 1928. Critics have described Martini’s range of work from “elegant and epic” to “grotesque and macabre” and consider him one of the precursors of Surrealism, with perhaps a hint of a Dadaist: artists who expressed their discontent with violence, war, and nationalism.

Antonio Franconi [1738, Venice Italia – 1836, Paris] is an Italian equestrian who began his entertainment career as a juggler and wandering physician. He continued with arranging bullfights in Lyon and Bordeaux. In 1783, he associated with the English horseman Phillip Astley who had opened a riding school in Paris, and they founded the equestrian theater called Cirque Olympique, (“Olympic circus”). He acquired an impressive reputation. It is a curious feeling to rewind time 300 years plus to imagine the lives of artists and entertainers. 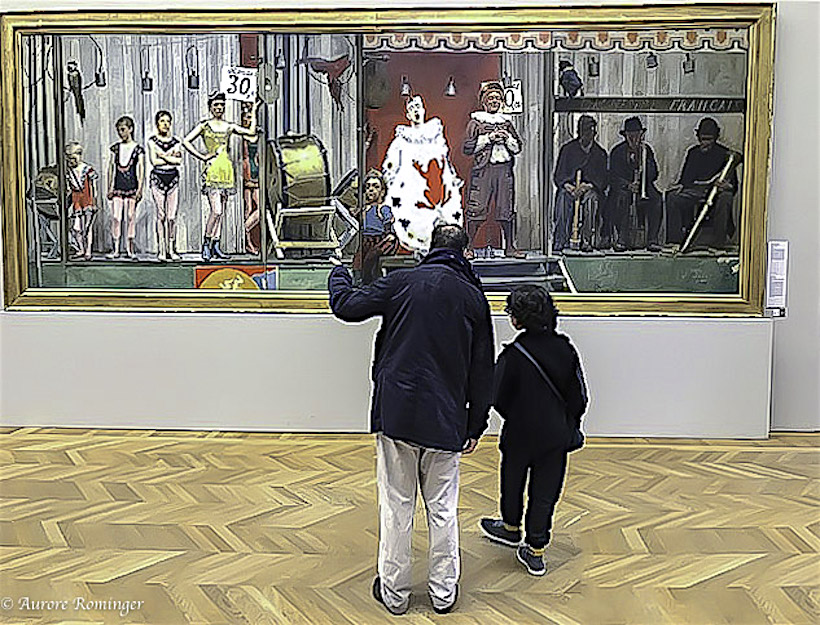 Grimaces and Misery—The Saltimbanques painted in 1888

All these Italians, in professions such as religion, press, education, circus performers, arts, music and cinema, sports and gastronomy, living as workers, miners, masons, farmers, tradesmen or entrepreneurs, have made France richer in diversity. It is a rewarding journey to visit this brilliantly curated and entertaining exhibition! 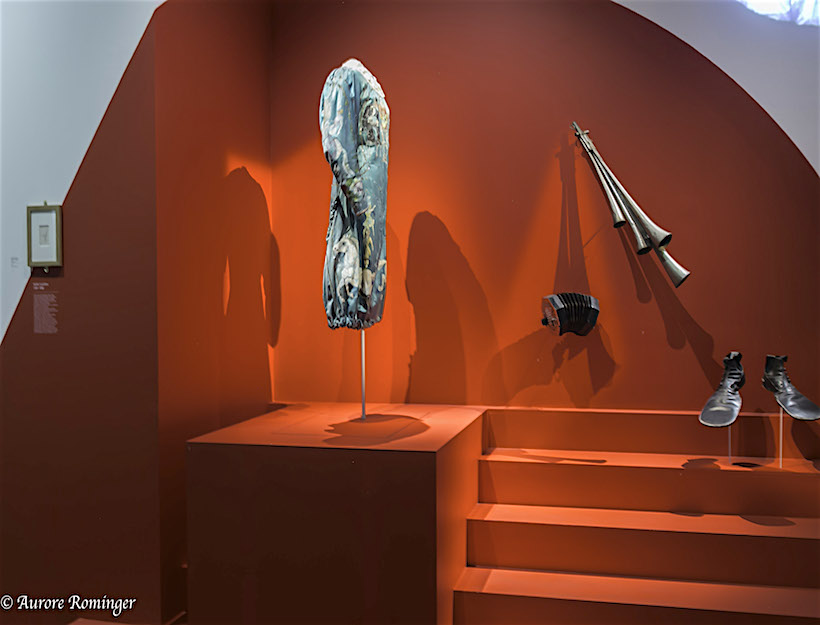 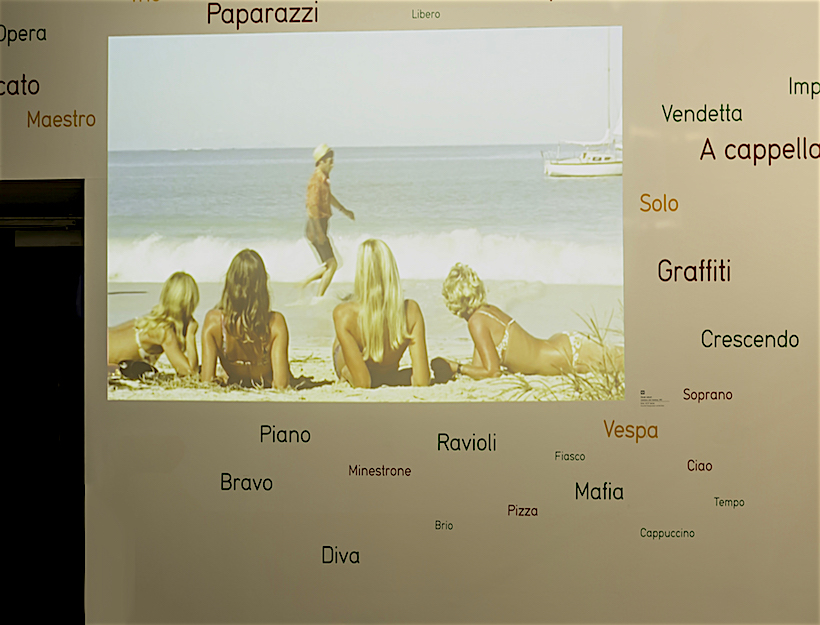 It is coalesced overall and throughout as subtle as nature’s elements weave changes with time. Decades pass to blend the disturbances of the status quo. Sociological meaning on a larger scale returns humanity to the heart of the matter – human dignity. On a lighter note, the above film, satire on French Men strutting at the seashore in order to captivate the attentions Italian women sunbathing on the beach ! Therein lies the ultimate continuation of the blending nationalities !

Along with Napoleon Bonaparte, an estimated 400,000 French are of Italian decent, and the current estimate of Italian citizens living in France is 174,000.

To celebrate its 10th year, on Saturday and Sunday 14-15 October, the Palais de la Porte Dorée Museum of Immigration  will sponsor a free program sharing the vibration of music of the world. The invitation offers the opportunity to have fun and to raise the passion for human dignity!

*Credits: Dominique Païni, freelance exhibition curator; Stéphane Mourlane, lecturer in contemporary history at the University of Aix-Marseille, and Isabelle Renard, Head of the Contemporary Art Collection at the National Museum of the History of Immigration.
*