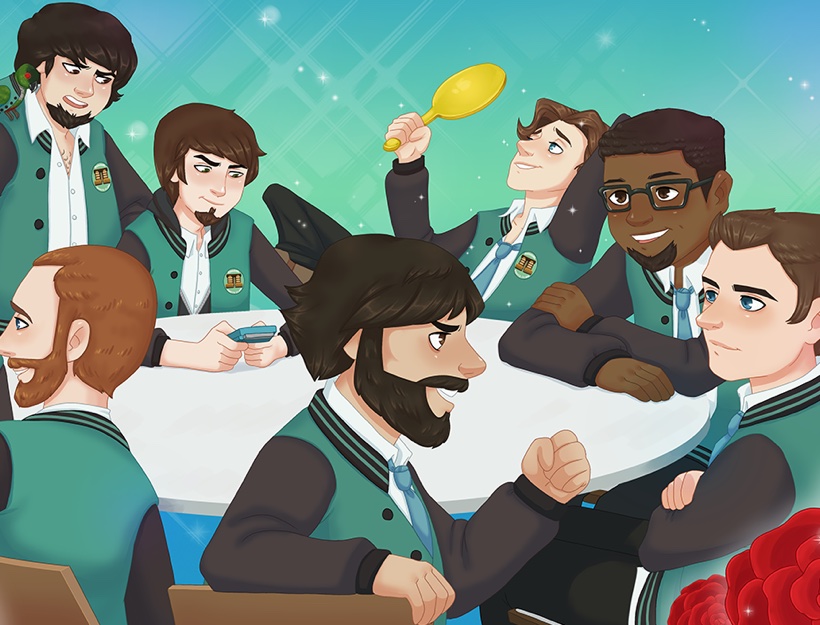 Asagao Academy is a geek’s dream! Not only do you get to date hot, nerdy guys in this FREE game, but the characters you date are actually based on real YouTubers! My sister and I came across this Asagao Academy when PeanutButterGamer, a popular Youtuber, did a video checking it out. Since one of the dateable characters in the game is based on him, it was pretty hilarious to see his reactions to his dating game persona and those of his fellow friends. If any of these Youtubers from ProJared to SpaceHamster are people whose channels you follow, you should check Asagao Academy out! Even if you’ve never heard of any of these guys in real life, Asagao Academy is a light-hearted, well written dating game that any geeky girl can enjoy.

Instead of making the main character a blank slate that the player can self-insert themselves onto, Asagao Academy has Hana, a shy, sweet-spirited, pink-haired transfer student who just arrived at Asagao Academy. After a year of being brutally bullied at her old school, Hana applied to Asagao for a fresh start. The story opens with her arrival and introduction to the Normal Boots Club, a gaming club full of the coolest guys at school. Hana wants to become a member herself, but to do so she must win her competition in the upcoming gaming tournament. Through friendship, self-understanding and a little bit of romance, Hana is able to find herself and gain a new dream for the future. 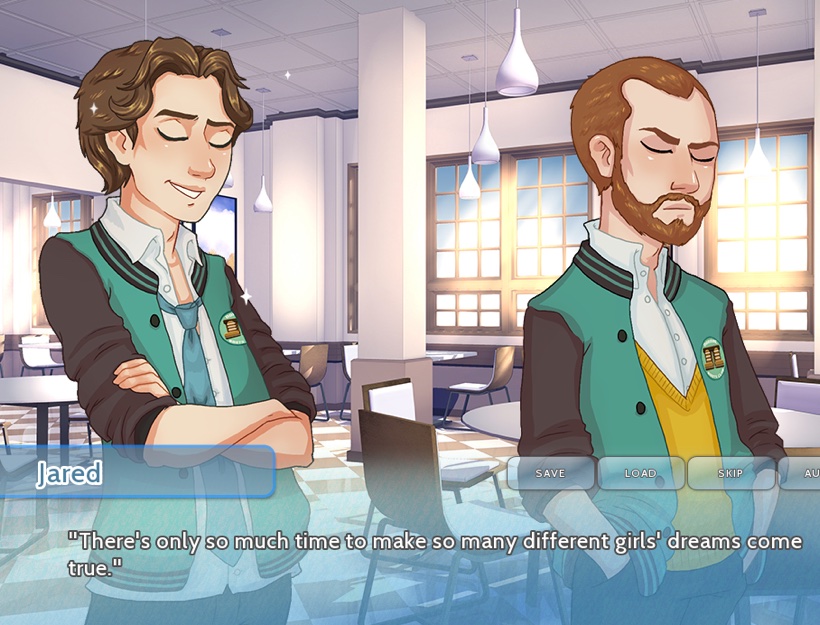 How the Game Works

Asagao Academy is a visual novel with choices placed at certain points throughout the game. The player can move at their own pace through the chapters, saving their progress along the way. The first chapter is almost entirely the same each time as is serves as the introduction to most of the characters. The story splits off near the end of Chapter 1 when Hana decides who she would like to go with to the Flower Festival, and the three chapters that follow are specific to that guy’s route.

All routes are open from the start, so you can date whichever guy you please, but some routes are harder than others. They range from easy to normal to hard to insane (or in-Shane, given the most difficult guy’s name). What makes certain routes harder than others are that these have more choice options that can lead you directly to a bad end. Based on your decisions for Hana, she can get one of four ends: best end, good end, bad end and worst end. While you’d have to be pretty intentionally savage to get the worst end, I did end quite a few of the routes on the bad end my first time through, so the choices in this game are not easy. But don’t despair! If you’re unhappy with the ending you got, the game has a Skip Mode that can take you through the route again super quickly and give you another chance at your happy ending! 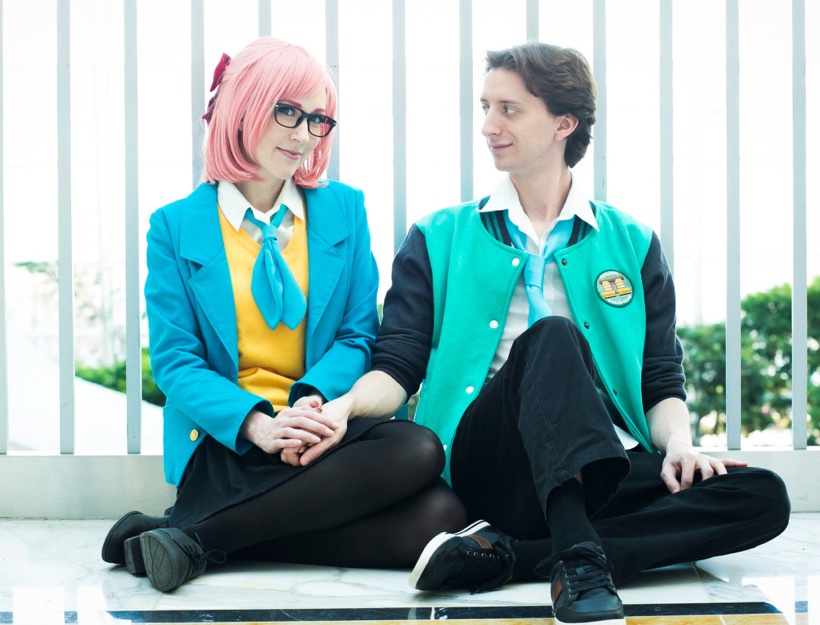 The guy in the photo is ProJared, the real-life version of one of the guys you can date in the game! Photo Credit – Atelier Heidi

Whenever I watch a show, read a book or play a game, the most important thing to me are the characters. If you don’t like the characters, what’s the point in following them? Asagao Academy provides hilarious, well-written, endearing characters. Not only are the guys you can date adorable and charming, but Hana is a gem in her own right: seemingly fragile, but with an inner strength that takes her on endless adventures. The supporting cast is also a riot! One of my favorites is Mai, Hana’s roommate. Her spunk and supportiveness bring Hana through high and low even if everything around her is going wrong. The Hidden Block club, rivals of the Normal Boots guys, are also a hoot. Although there aren’t full routes for them, they do have a Secret Chapter that I highly recommend. The game’s illustrations are winsome and eye-catching, and the bouncy, upbeat soundtrack is a treat in its own right (it’s available on iTunes if, like me, you find you want to listen to the music outside of the game).

The thing that sets Asagao Academy apart from other dating games is how self-aware and geeky it is. There are references to video games and anime throughout the routes that will make you smile, and the game knows when to poke fun at the tropes it falls into. Hana’s pink hair making her a main character is a common theme that has great importance in some routes, and characters will sometimes break the fourth wall and talk about their creators or refer to the world around them as “the game”. The dialogue in Asagao Academy is so good that you’ll be taking screenshots throughout your playthroughs to remember all the hilarious quotes and moments that transpire. 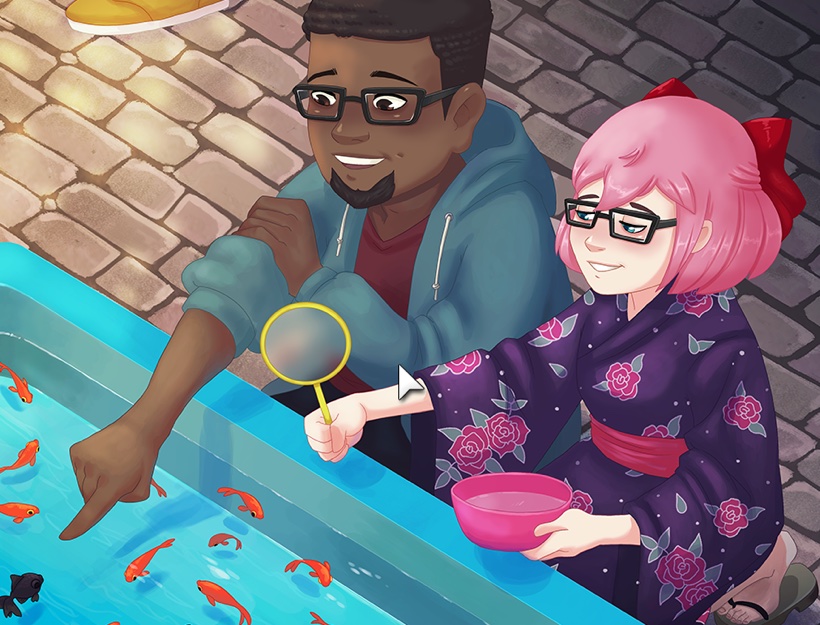 I would rate Asagao Academy a PG-13 game. While there are occasional swear words and the stories can sometimes be covering some pretty serious content, at its core Asagao Academy is a sweet, light-hearted game that can be enjoyed by any girl teenaged through her twenties. I am amazed that this is a FREE game, because it is simply excellent. From the characters to the illustrations to the soundtrack, Asagao Academy is a well-crafted, irresistible story that will entertain for hours and keep you coming back for more.
*