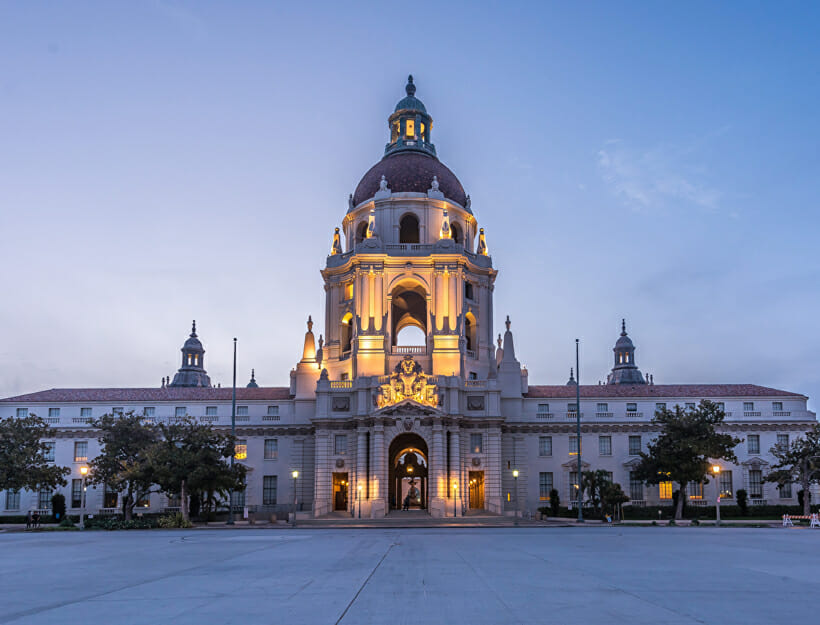 “It was the best of times, it was the worst of times,” wrote Charles Dickens at the beginning of his seminal book A Tale of Two Cities.
Many people today are dissin’ 2020 like a bad penny; memes, tee shirts, and coffee mugs can all be found that denigrate the year.  And it’s no wonder: in California alone we’ve experienced unprecedented fires throughout the state, the coronavirus pandemic to deal with, nonstop political division (and at one point a 4.5 magnitude earthquake) and perhaps most importantly, like the rest of the country, we are experiencing a civil rights reckoning focused on the effects of systemic racism, white supremacy, and police brutality. As in many cities across America and beyond, residents and families in Pasadena felt compelled to protest and stand in solidarity with Black Lives Matter this past summer after the horrendous death of George Floyd at the hands of police.

Yes, even during a pandemic thousands and thousands of people across the country and even beyond felt an urgency to stand up and demand change in regard to policing and racism. In Pasadena, a vigil was organized to grieve the death of George Floyd that included a car caravan and a socially distant rally. 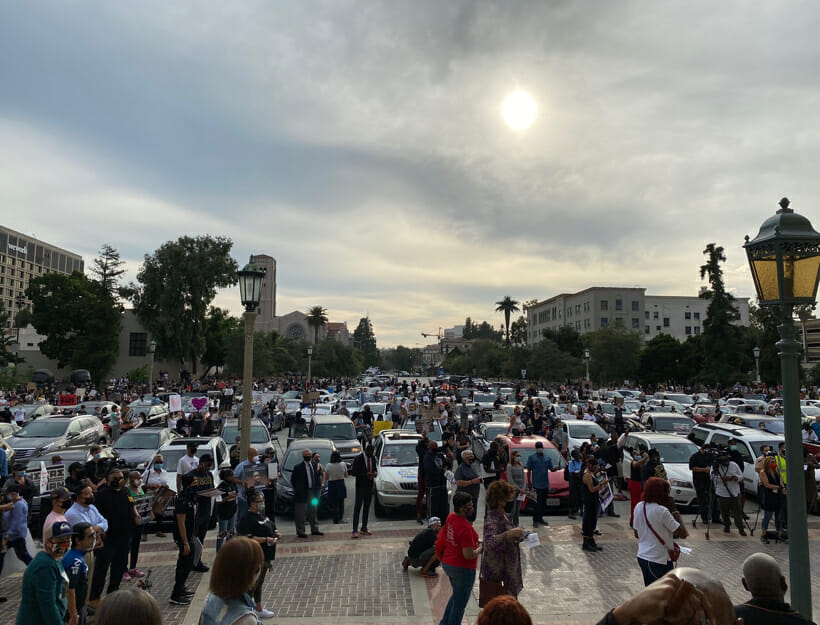 George Floyd Protest, 6.2.20, Pasadena, CA, looking out from in front of City Hall

Georgia Sanders, Founder and Editor of CultureHoney.com, said, “The murder that was caught on camera of George Floyd at the hands of police was so grievous that my husband and I felt a moral calling to stand with those suffering in the African American community specifically – and generally to join our voices in a tangible way with all those calling out for justice. We weighed the risks and did our best to keep physically distant and safe, as I can attest that the other participants that I observed did as well. We wore masks, stood 6 ft from others and used hand sanitizer generously, showered at home and washed our clothes asap after these events.” And she continued, “Standing against acute violence and systemic injustice perpetrated against our black and brown friends is not the same as wanting to sit indoors at a restaurant, get a haircut or attend a crowded event for pleasure. Just as people’s lives are at stake from Covid-19, people’s lives are at stake every day from policy brutality. Each person has to make the choice for themselves as to what they are able to contribute to change our society for the better and how they can use their individual influence and platform(s) for the good of all.” 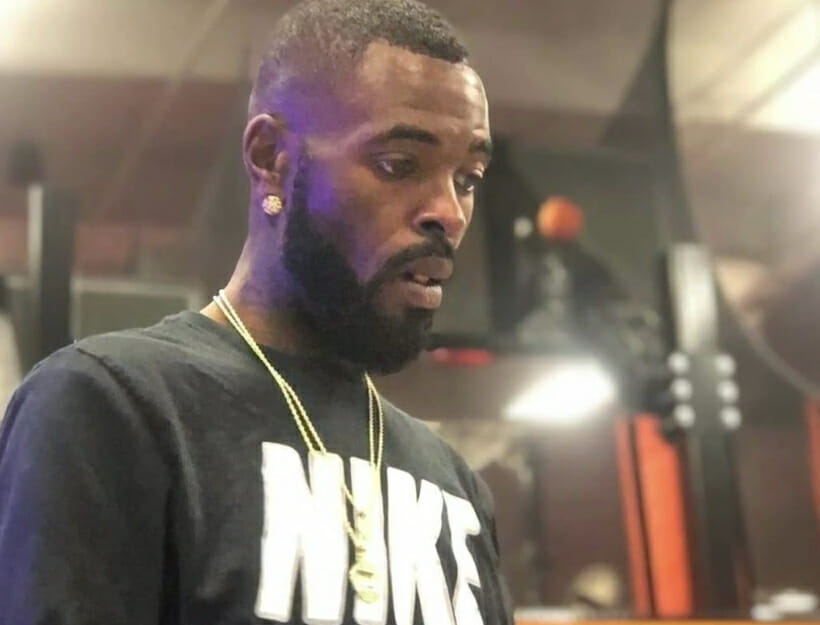 After a seeming litany of black folks being killed at the hands of police (like Breonna Taylor , Elijah McClain,  Michael Brown, and grievously, too many more to name here), on Saturday, August 15th a 32 year old father of three, Anthony McClain, was killed at the hands of a Pasadena police officer. The next evening, just over 24 hrs after Anthony McClain lay bleeding to death across the street from La Pintoresca Park in Northwest Pasadena, California, the neighborhood and surrounding community gathered to mourn and remember the young man. Mr. McClain had been shot in the back by a Pasadena Police officer after a traffic stop where he was the passenger in the car. Tragically, he died from the gunshot wounds later that night. A crowd made up of local residents, some families with children, had been peacefully gathered in disbelief with candles, music, tears, and condolences all throughout the day across the street from the park.

But as the summer evening wore on, the Pasadena Police decided the community mourning needed to come to an end. When they showed up they were in riot gear with shields, amplified voices shouting demands, and police helicopters overhead shining spotlights on the mourners. It became a scary scene as you can see in the video recorded by a local clergyman here:
The following Wednesday night on August 19th, many of the same Pasadena community were joined by others to peacefully (if loudly) protest police brutality and demand justice for Anthony McClain. A caravan of cars, some people walking and some on bicycles, proceeded from La Pintoresca Park and into the Old Town area of Pasadena. 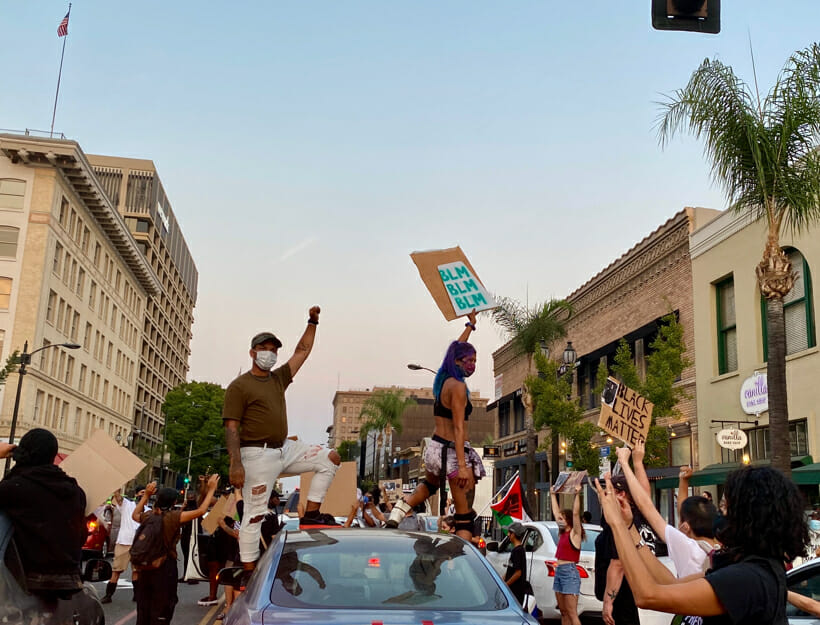 With horns blaring and chants loudly proclaiming that Black Lives Matter, at one point people knelt down or even laid on the ground, crying, “Hands up, don’t shoot,” or “I can’t breathe”. “Black Lives Matter” was being chanted off and on by a diverse and determined coalition of protestors.  The caravan traveled through Pasadena and eventually came to a stop outside the Pasadena mayor’s house which is located in the Madison Heights area of Pasadena, south of California Blvd. 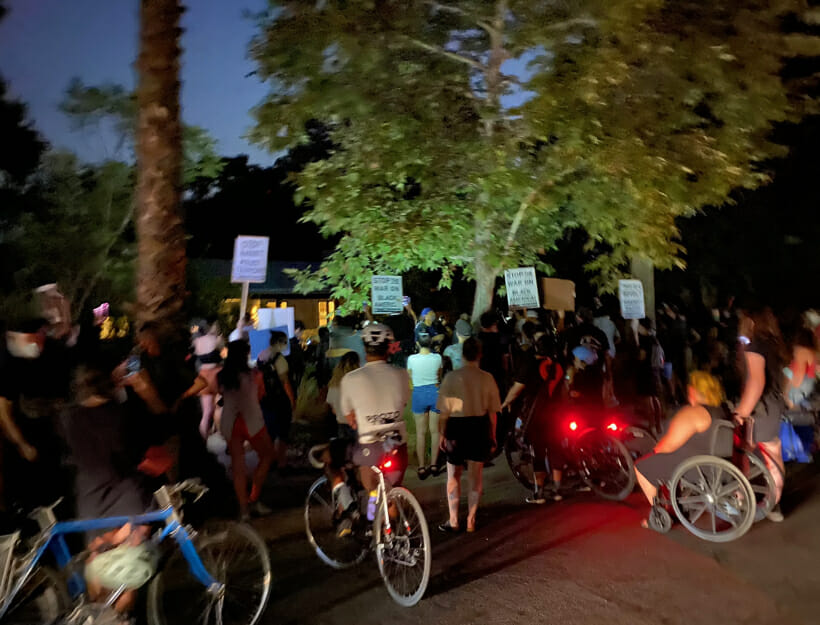 Down the street, about two blocks away from the mayor’s house, shrouded by the now darkened sky, two motorcycle police officers were seen parked. The motorcycle lights were off and they were sitting so quietly most people wouldn’t even notice they were there. There were no loudspeakers using demanding or threatening language, no helicopters overhead bringing a war zone atmosphere and no police in riot gear clogging the neighborhood streets. What was the difference in the actions of the Pasadena Police between the two neighborhoods? Pretty night and day. In fact, the police response was so dissimilar a person who is unfamiliar with the area would have the impression that these were two different cities. But actually, the distance separating the two neighborhoods, both within the border of Pasadena, is only 3.2 miles.
Unfortunately there are many gaps in the neighborhoods of Pasadena, but with the death of Anthony McClain policing has come to the front and center of people’s minds. Do we need to create equity in all areas of our society?  Yes, educational, financial, health care, yes, yes, yes! But perhaps one of the first steps, especially for those among us who belong to the dominant culture here in Pasadena, is to understand how people living in two different neighborhoods in the same city can be treated so differently by the police department.
The “worst of times” and the “best of times” were mentioned at the beginning of this article and the worst of times were described. What about the “best” of times? The best of times will be when people living in Pasadena receive equal protection and equal treatment by the police department and in all city services no matter what neighborhood, what zip code, or what district they live in.
*
2020, A Tale of Two Cities: Pasadena, California